Be a skating star in Halfbrick’s new game – Star Skater

Star Skater is the game where you don’t just cross the road, you own it!

AUSTRALIA, Brisbane – December 17, 2015 – The creators of Fruit Ninja and Jetpack Joyride are thrilled to announce their newest release, Star Skater – a game that challenges you to not just cross the road, but own it.

Available now on the App Store and Google Play, Star Skater is published by Halfbrick Studios in conjunction with Shawn McInerney of MooseMouse LLC.  Tempting players to throw caution to the wind and ride with style, this game brings the thrill of skateboarding to the masses.

Featuring a voxel art style and signature Halfbrick polish, Star Skater is a free-to-play, third-person racer which turns mountain roads and busy city streets into the ultimate playground. Powerslide past speeding cars, slalom past barriers, and get huge air while trying to beat the clock. Crashing is just half the fun!

Style counts too. Earn Style Points, Magic Burritos, and Skater Bucks to unlock new decks, wheels, and a whole bunch of crazy characters. Is a skating gorilla doing an ollie not good enough? Don’t fret, a huge line-up of additional characters and tricks will be added in regular updates!

Based on the premise of facing your greatest challenges, creator Shawn McInerney says Star Skater is an homage to the daredevil in all of us.

“I was obsessed with skating as a kid,” he said. “The best hills always had an intersection at the bottom where there was a risk of getting hit by a car. Consequently, I never took the chance.

“This game is my way of having a do-over and skating the way I always wanted to… without fear.”

And, while not a skater by any stretch of the imagination, Halfbrick CEO Shainiel Deo said it felt good to provide a global stage for independent developers with limited resources.

“This was a truly collaborative effort, representing a new approach to publishing here at Halfbrick,” he said.

“Our sound, art, design, and QA departments have been working hand-in-hand with Shawn since the very beginning. It’s a Halfbrick game in every sense of the word.”

“There would be no Star Skater without Halfbrick,” added McInerney. “It’s been an incredible journey and I can’t wait to see what the future holds.”

Star Skater is available on the App Store and Google Play as a free download with optional in-app purchases. For more information, please contact press@halfbrick.com.

Halfbrick is a professional game development studio based in Brisbane, Australia. Founded in 2001, it has developed many popular games across mobile and digital platforms including Fruit Ninja,  Jetpack Joyride and Fish Out Of Water. For further information, please visit halfbrick.com and follow on Twitter,  YouTube or Facebook.

MooseMouse LLC is Shawn McInerney’s one-man game company. Shawn has been making games since 2009, and working in the computer graphics and animation industry since 1995. He has contributed his artistic and technical talents to video games with companies such as EA, big budget motion pictures such as Polar Express, Open Season, Surf’s Up, G-Force, and Cloudy with a Chance of Meatballs, and advertising campaigns for major brands such as M&M’s Candies, Coke, and Nintendo. 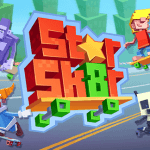