Are YOU one of those people who take pleasure in poleaxing pineapples? What about wasting watermelons, annihilating apples, punishing peaches or obliterating oranges? Do you get a sense of satisfaction from shredding strawberries? Killing kiwifruits with a katana? Butchering bananas with a blade? Or maybe, just maybe, you get off on TOTALLY PWNING pomegranates?

If so, it’s time to sharpen them swords, grasshopper… Fruit Ninja not only just clocked ONE BILLION downloads, we also turned 5! And that means a brand-spanking, blade-slashing, new gore-tacular splatter-fest of an update.

Dropping THURSDAY AUGUST 6 on the App Store, Google Play and Amazon Appstore for Android, the new Fruit Ninja update is FREE for new and existing players. It’s been a fun and fruitful five years, so this is Halfbrick Studios’ way of saying “Arigatō!” Whether you’re a casual fruit-slaying commuter or a dedicated smartphone shinobi, the new and improved Fruit Ninja is going to rock your socks off (while no doubt infuriating grocers and sending fruitaphobes quivering into the foetal position).

Halfbrick CEO Shainiel Deo is likewise pumped about what this all means. “The latest update of Fruit Ninja is really a new chapter for the game and for Halfbrick,” he said. “We are grateful for the success it’s brought, but we’re also excited by the evolution of the game… and it all starts here.”

So what’s new exactly? Well, this is a whole new competitive era for Fruit Ninja, so things are about to heat up…

GOLDEN EMBER BLADE
Make it through the new Tournament Mode and you will be awarded this new bad-ass blade. Use it to trap fruit in a fiery blaze and then slice ’em twice for epic high scores!

July 2015
Fruit Ninja tops ONE BILLION downloads, making it the second most-purchased app of
all time on iPhone, a bona fide Australian success story and a global gaming phenomenon

For more information on Fruit Ninja and Halfbrick Studios, contact: 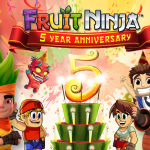 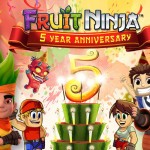