Los Angeles—April 21, 2017—It’s time for families to get their game on with a brand new animated series inspired by one of the most popular gaming apps with more than one billion mobile downloads—Fruit Ninja.  The 13-episode series featuring fruit-themed characters familiar to fans of the franchise will be available Friday, May 5, 2017 on YouTube and the YouTube Kids app for YouTube Red subscribers.

Fruit Ninja is an animated series that follows the humble beginnings of four Fruit Ninjas who run a juice stand as a front for their secret ninja dojo.  Fans are introduced to the four young ninjas—Seb, Niya, Peng, and Ralph—who have been training to unlock the ancient secrets of Juice-Jitsu.  When a time portal opens, transporting a 1000-year-old ninja, Durian Grey, into the modern world, the four must come together to defeat him and a cast of evil characters who have pledged to wipe out the Fruit Ninjas once and for all.

The YouTube Kids app is the first Google product built from the ground up with kids in mind.  The App makes it easier for children to find videos on topics they want to explore and is available for free on Google Play and the App store.  YouTube Kids continues to put parents in the driver’s seat with additional parental controls that allow parents to choose what is right for their family.

Halfbrick is a game development studio based in Brisbane, Australia. Founded in 2001, it has developed many popular games across mobile and digital platforms including Fruit Ninja (iOS and Android), Jetpack Joyride (iOS, Android, PlayStation 4) and Dan the Man (iOS and Android). For further information, please visit halfbrick.com 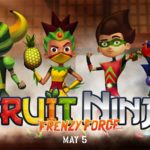