Halfbrick and iDreamsky release an all-new Fruit Ninja for Tencent

AUSTRALIA, Brisbane – Fruit Ninja is one of the most successful mobile games of all time, and China has been one of the most prominent regions where Fruit Ninja has remained a top brand. Today Halfbrick is proud to announce a all-new game in collaboration with Fruit Ninja’s exclusive Chinese publisher and co-developer iDreamSky, which will published by Tencent Games.

Designed with exciting characters, items and powers as a priority, Fruit Ninja for Tencent is a new and fresh game in the popular series. Keeping the essence of the classic Fruit Ninja gameplay intact, the new adventure adds an incredible amount of customization, colorful powers and progression, and amazing social features to compete with friends.

With already more than 1.5 million Mobile QQ users confirming intent to download Fruit Ninja for Tencent, Halfbrick and iDreamsky are confident for the future of the brand and excited to invited all Fruit Ninja fans to try to new experience!

“The Chinese market is incredibly powerful, and Fruit Ninja fans have always been very supportive of our games,” said Phil Larsen, Chief Marketing Officer at Halfbrick. “We couldn’t be prouder to partner with iDreamSky and Tencent to release a new version that is exclusive to China’s most popular social networks, QQ and WeChat.”

Fruit Ninja for Tencent is being released as a free download for iOS and Android platforms in early September. 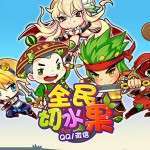