Launching globally on July 14th, the digital game adaptation of NBC’s hit TV show will soon be available for $0.99 USD on the App Store and Google Play, giving partygoers everything they need to turn an evening with friends into the ultimate game night experience.

The outrageous social game allows up to eight players to participate in a series of laughter-inducing mini games, including fan-favorites like “How Do you Doo?”, “Take the Hint”, “Smash the Buzzer” and “I Love a Charade”. There are eight games in total.

Each game – made popular by celebrities – requires players to sing, mime or test their knowledge across a wide range of topics including music, movies, celebrities and sports.

The mobile game places a heavy emphasis on pop culture trivia and fast-paced gameplay, and is the perfect way for players to replicate all the excitement and spontaneity of the game show experience.

“Halfbrick is thrilled to partner with Universal Partnerships & Licensing to take the fun and games of ‘Hollywood Game Night’ from the living room television to the palm of your hand,” said Sara Fonseca, marketing coordinator at Halfbrick. “‘Hollywood Game Night’ is a perfect smartphone and tablet game — fostering spontaneous bouts of hilarious party games with friends all around the world.”

About “Hollywood Game Night”
“Hollywood Game Night” transports contestants from their everyday lives to a once-in-a-lifetime night of fun and celebration as they step beyond the velvet rope and rub shoulders with some of their favorite celebrities to compete for the chance to win up to $25,000. Hosted by Emmy Award and Golden Globe winner Jane Lynch, “Hollywood Game Night” is produced by Hazy Mills Productions (“Grimm,” “Hot in Cleveland”), Mission Control Media (Syfy’s “Face Off”) and Universal Television. Sean Hayes, Todd Milliner, Michael Agbabian and Dwight D. Smith are executive producers.

About Halfbrick
Halfbrick is a professional game development studio based in Brisbane, Australia. Founded in 2001, it has developed many popular games across mobile and digital platforms including Fruit Ninja, Jetpack Joyride and Fish Out Of Water.  For further information, please visit halfbrick.com and follow on Twitter, YouTube or Facebook. 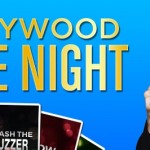