In Battle Racing Stars, players will lace-up and race against rivals from all around the world. From out-running UFOs to traveling through interdimensional portals, this is no ordinary racing game. A star-studded cast of familiar faces, paired with countless unique game modes, make for an addictive, action-packed burst of excitement. Halfbrick is back doing what it does best!

Battle Racing Stars is yet another project to come out of Halfbrick’s internal game-jam initiative, Halfbrick Fridays. In fact, it was the same game-jam which brought Halfbrick its previous release, Magic Brick Wars. Voted internally as ‘Best Game’, it was clear Battle Racing Stars showed promise. The competitive, fast-paced, pick-up and play nature of the game made for an addictive recipe which demanded further exploration.

The infamous ‘Pijama Team’ who brought you Dan The Man, is the group responsible for Battle Racing Stars. This is evident when playing the game. The patented humour which helped make Dan The Man the success it has been, is intrinsic throughout Battle Racing Stars. It is the same Halfbrick humour which birthed the legend of Barry Steakfries, who you can play as in this game! 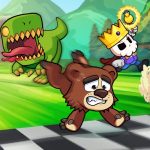