AUSTRALIA, Brisbane – April 28th, 2015 – The storied rivalry between bears and abstract art will soon be settled once and for all, as Halfbrick prepares to launch Bears vs. Art, the studio’s first true puzzle game, to a global audience on iOS and Android.

In Halfbrick’s quirkiest game yet, Rory the bear must fight to protect his forest home from greedy millionaires with questionable taste and complete disregard for the environment. Pretentious art galleries are popping up left, right and centre, so fierce resistance is the only option at hand!

Bears vs. Art boasts 150 levels spanning six diverse islands, from the pristine forests of Grassy Woods to the perilous cliffs of Mount Molten. Players venture through hours of grid-based action, finding the quickest and easiest route to destroy every painting on every wall.

Each gallery is teeming with obstacles, forcing players to plan their moves carefully or race the clock in timed challenges. There are spikes, lasers and mind-bending portals, not to mention snooty guests, nosy security guards and art-snatching thieves to make life difficult!

New to Bears vs. Art is “Infinite Mode”, where players can face off against randomly generated puzzles, and share these levels with friends on Facebook. Offering a unique, challenging and unpredictable experience, this mode provides immense replay value on top of the main adventure.

In addition, the global version of Bears vs. Art features upgradable costumes, an RPG skill tree, more customisation options and a new photo mode. The game’s soundtrack, UI, and social features have also been enhanced, adding to the signature polish that Halfbrick fans have come to expect.

“Bears vs. Art has come a long way since its initial launch in Canada and Australia,” said Shainiel Deo, chief executive at Halfbrick. “Community feedback has been crucial to the game’s development, and we’re excited for players in other regions to finally get their hands on the game.”

Bears vs. Art launches April 30th on the App Store and Google Play as a free download with optional in-app purchases.

For more information, or to request a promo code, please contact press@halfbrick.com

Halfbrick is a professional game development studio based in Brisbane, Australia. Founded in 2001, it has developed many popular games across mobile and digital platforms including Fruit Ninja,Jetpack Joyride and Fish Out Of Water. For further information, please visit halfbrick.com and follow on Twitter, YouTube or Facebook. 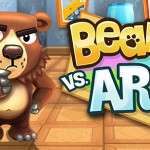