Halfbrick’s next game is Bears vs. Art

AUSTRALIA, Brisbane – March 10th, 2014 – In today’s society, even a single painting can be sold for hundreds of millions. Art galleries are havens of emotion, discussion, criticism and analysis from the most discerning individuals. Do those scribbles on the paper really mean what people say they mean? Is it genius or a fluke? Some may be interested in answering these questions, but many people simply don’t care. You know who else doesn’t care about art? Bears.

In Halfbrick’s quirkiest game yet, Rory the bear is quite bewildered by the recent art galleries cropping up in his forest home. Snooty millionaires are admiring their latest collections and proclaiming their love of fine wines and cheeses, all while Rory is trying to enjoy a cup of tea and a nap. Art is dumb to him, so players can now join his fight to rid the forest of these pointless pieces invading his home!

Bears vs. Art is Halfbrick’s first true puzzle game, with small elements of action and speed coming into play during hectic moments. Players venture through 125 levels of grid-based action, finding the quickest and easiest route around every gallery to slice up the paintings. Rory rolls and smashes into everything he sees, all for the glory of taking down modern art!

Each piece of art is protected by sneaky security measures including lasers, spikes and mind-bending portals. Not to mention snooty guests, nosy security guards and art-snatching thieves, who will all make Rory’s quest more troublesome.

Bears vs. Art is Halfbrick’s newest game for 2014, following  recent successes including Band Stars and Colossatron. It is currently available on the App Store for iPhone, iPad and iPod Touch in Australia and Canada. Worldwide release details will be announced soon!

Watch the debut trailer below, narrated by Kevan Brighting from The Stanley Parable!

Halfbrick is a professional game development studio based in Brisbane, Australia. Founded in 2001, it has developed many popular games across mobile and digital platforms including Fruit Ninja, Jetpack Joyride and Colossatron. For further information, please visit halfbrick.com and follow on Twitter, YouTube and Facebook! 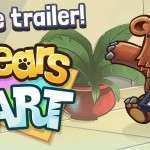