AUSTRALIA, Brisbane – June 2nd, 2015 – The creators of Fruit Ninja and Jetpack Joyride are just days away from releasing Radical Rappelling to thrill-seekers and adrenaline junkies around the world, developer Halfbrick has announced.

Coming to iOS and Android on June 4th, Radical Rappelling is a high-score chaser which embraces speed, precision, and fast-twitch gameplay, taking the sport of rappelling to new heights with ridiculous obstacles, over-the-top tricks, and a volatile volcano just for good measure.

Players control Rip and Roxy, two of the most fearless risk-takers on the planet, as they attempt to outrun molten lava in a daring mountainside descent. And, while the one-touch controls are easy to master, gameplay itself is anything but.

Falling lava presents a constant threat from above, forcing players to maintain momentum despite the dangers below. Pausing for even a second is a high-risk endeavour, so quick thinking and keen reflexes are critical to success. Thankfully, Rip and Roxy aren’t just your average adventurers.

Each character can pull off death-defying tricks by ricocheting between launch pads, riding rainbows, and rocketing over obstacles with reckless abandon. Chaining tricks contributes to the game’s Remix Bar, which enables a brief period of invincibility when triggered during a run.

Throughout each game, players collect coins and complete missions to level up their character and buy new accessories in the shop. There are more than 200 items to choose from, including sunglasses, superhero capes, and the highly practical “sausage rope”.

A range of power-ups and modifiers are also available, offering limited protection from the game’s many hazards. Revives, recoil boots, and slower lava can delay death temporarily, but even the most seasoned gamers will quickly learn that boosts and upgrades are no substitute for experience.

“One wrong move, one tiny lapse in concentration and it’s all over,” said James Schultz, community coordinator at Halfbrick Studios. “There’s no denying that this is our hardest game yet, so fans of Jetpack Joyride and Monster Dash are in for a treat.”

“It feels good to embrace our roots again,” added Shainiel Deo, CEO at Halfbrick. “Our recent releases have been more casual in nature, but that’s certainly not the case with Radical Rappelling. If you like a challenge, then this is the game for you.”

Halfbrick is a professional game development studio based in Brisbane, Australia. Founded in 2001, it has developed many popular games across mobile and digital platforms including Fruit Ninja, Jetpack Joyride and Fish Out Of Water. For further information, please visit halfbrick.com and follow on Twitter, YouTube or Facebook. 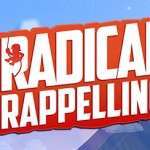