AUSTRALIA, Brisbane – December 19th, 2013 – It’s party time at Halfbrick as the Aussie studio’s final game of the year Colossatron: Massive World Threat launches around the world simultaneously on the App Store for iPhone, iPad and iPod touch, and on Google Play and Amazon Appstore for Android.

Players take the role of Colossatron in the ultimate role reversal, on an explosive quest to destroy cities and ultimately the entire planet. Hardened military hero General Moustache is the key to Colossatron’s demise, but the best players will create powerful strategies to fend off the General’s gunships, mechs and battle tanks. And I, for one, welcome our new gigantic robot snake overlord.

Colossatron has been a year in the making, with gameplay innovation being a key focus for the development team. Using a core color-matching mechanic to build Colossatron and fight off hordes of military attackers takes inspiration from tower defence and real-time strategy. There’s nothing else quite like it, and Halfbrick is always proud to add another unique game to its portfolio of mobile hits.

Adding a fresh layer of style was also important to keep the action covered and the story moving. Everything is presented from the viewpoint of Action News 6, the hard-hitting team of reporters who see Colossatron as both a catastrophe and chance for ratings! Rick Dalton covers all the action from the studio, and field reporter Katie Hazard checks in with live updates from the battle zone.

Colossatron: Massive World Threat is Halfbrick’s flagship game of 2013. It is available now worldwide as a paid title with optional in-app purchases.

Halfbrick is a professional game development studio based in Brisbane, Australia. Founded in 2001, it has developed many popular games across mobile and digital platforms including Fruit Ninja, Jetpack Joyride and Fish Out Of Water. For further information, please visit halfbrick.com and follow on Twitter, YouTube and Facebook! 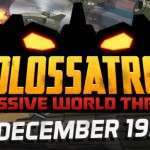 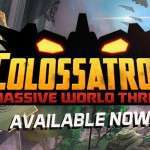