Australia, Brisbane – July 15, 2016 – The creators of Fruit Ninja and Jetpack Joyride have joined forces with popular YouTube personalities for the launch of Star Skater’s biggest update ever: the YouTube Celebrity Skate-Off.

Starting today, players have one week to unlock as many YouTube personalities as they can in preparation for a global community Skate-Off. This is done by depositing virtual currency (Sk8 Bucks) into the game’s prize machine.

Once the Skate-Off begins, players can support their favourite YouTube personality by collecting golden trophies which have been scattered throughout the game’s 60 levels. Some have also been hidden in a brand new location featuring sunburnt roads, shadowy caves, rickety bridges and epic jumps.

The YouTube star with the most trophies at the end of the competition will be crowned King or Queen of Star Skater, and anyone who contributes at least 50 trophies to the winning team will receive a Golden Victory Pack containing a secret deck.

As an added incentive for all players, dedicated skaters will receive three additional decks – the Game Controller Deck, Video Cassette Deck, and the Mobile Phone Deck – as they collect more and more trophies throughout the competition.

Star Skater is available on the App Store and Google Play as a free download with optional in-app purchases. For more information, please contact press@halfbrick.com

Character Hunt (July 15 – July 22)
Randomly unlock YouTube stars by depositing Sk8 Bucks into the game’s prize machine. Players have just over one week to unlock as many YouTube personalities as they can before the race officially starts.

Skate-Off Begins (July 22 – August 13)
Collectible trophies now appear in the game. Players contribute to a team by collecting trophies while skating as their favourite YouTube star. A global leaderboard will be activated to track community progress.

Winner Announced (August 13)
Every player who contributes at least 50 trophies to the winning team will receive a Golden Victory Pack as a thank you for shredding hard. Lastly, the winning YouTube star will pick one lucky fan to join them as a playable character in the game.

Halfbrick Studios is a professional game development studio based in Brisbane, Australia. Founded in 2001, Halfbrick has developed many popular games across mobile and digital platforms including Fruit Ninja, Jetpack Joyride and Dan the Man, which is slated for global release in 2016. For more information, please visit halfbrick.com and follow on Twitter, YouTube or Facebook.

MooseMouse LLC is Shawn McInerney’s one-man game company. Shawn has been making games since 2009, and working in the computer graphics and animation industry since 1995. He has contributed his artistic and technical talents to video games with companies such as EA, big budget motion pictures such as Polar Express, Open Season, Surf’s Up, G-Force, and Cloudy with a Chance of Meatballs, and advertising campaigns for major brands such as M&M’s Candies, Coke, and Nintendo. 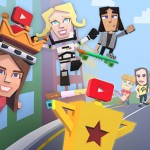